Maybe we should slow down with these. It’s not like we have enough of them to last until the release date of December 31. (Shameless plug!)

As we mentioned before, this cover mock-up made us wish for a horizontal image. So we tried mirroring the structure horizontally. This led to all sorts of DIY horror, the first of which looked like this:

Our first attempt at using the Sagrada Familia image made us wish for a horizontal photograph. So we tried zooming in a little. We dismissed this one without much debate, although there is some pretty nice detail at the base of the structure.

Now that we’ve revealed our forthcoming book and its cover, we can start reviewing those alternate book covers that we took halfway seriously. From the book’s credits page:

Zidi Publishing gratefully acknowledges Zyvex Labs and the photographer, Irene Fernandez Cuesta of the National Center of Microelectronics (CNM-IMB, CSIC) for permission to use their copyrighted work. Find the unmodified version at http://www.zyvexlabs.com/EIPBNuG/EIPBN2007/IFC-Gaudi-Sagrada-Familia.jpg, last accessed October 2012.

Of the creation of the image, Fernandez Cuesta writes: “The micro structure is the result of an unsuccessful nanofabrication process. The sample was intended to be a gold plasmonic guide, but after several imprinting and cleaning steps, all that was left was this micro-Sagrada Familia at one of the ends of the waveguides. The image was obtained with a scanning electron microscope.”

As we wrote in late August, The Music and the Spires — then only one possible title among several — led us to search the web for images of Sagrada Familia in Barcelona. In a true cart-before-the-horse moment, Cuesta’s image so deftly captured the mood of the book that the title The Music and the Spires was cemented in place with our discovery of the photograph. Here it is:

The next several posts will follow our DIY attempts to convert this image into a book cover. Here was our first: 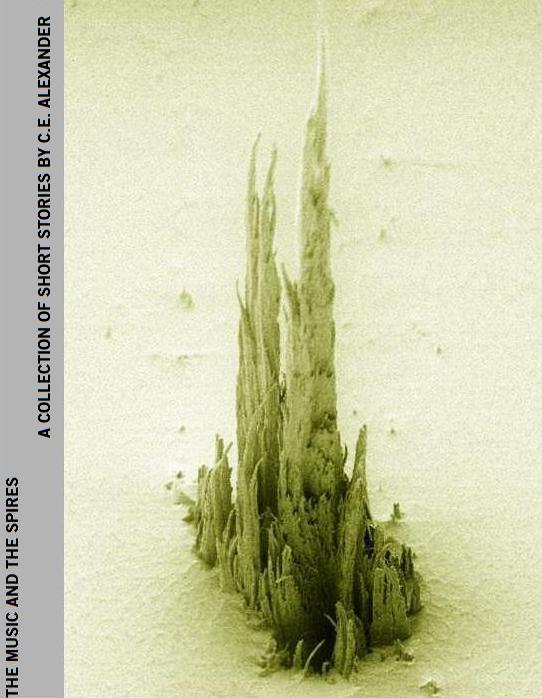 Last one before we announce the official details. That way we can roll out some of the now-quite-embarrassing DIY stuff.

What are we looking at? It’s the Tacoma Narrows Bridge. And we’ve said way too much already.